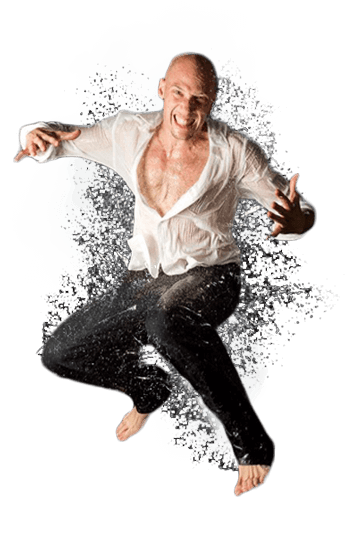 Performer & rhythm specialist - performs, creates and teaches internationally as a dancer and musician for stage and live television. Specializing in the conceptualization and design of original performance pieces where rhythm meets music, movement and theater

A citizen of the world - Michael believes in freedom of thought, loves nature and human-nature.

Michael specializes in instrumental percussion, body-percussion and beatbox. Also a dancer, actor and clown, he has created with Franco Dragone (Cirque de Soleil), Giuliano Peparini (Le Rêve, Las Vegas) and the Mayumana company in award winning shows. In the last 15 years he has performed in theaters, arenas and on TV around the world in front of millions of spectators. Today he is based in New York.

Michael creates original body-percussion based choreography some of which can be seen today in Romeo & Guiletta running in Italy and The Han Show, playing in China. Past choreography credits include numbers in 1789 Les Amants de la Bastille a smash-hit musical in Paris, France and special guest appearance on Amici de Maria de Phillipi a competition talent (reality) television show in Italy. Michael collaborates directly with choreographers to integrate his rhythmical pieces into dance numbers and trains professional dancers to perform them.

As a professional beatboxer, Michael has lent his musical and rhythmical beats to various projects with musicians and dancers all over the world. His unique experience in theatre, as a musician and as a dancer allows him to weave vocal rhythm seamlessly into various contexts. He has worked the New York scene opening for a Sting concert and collabortating with vocalist Michael Winslow (Police Academy) as part of an awrard winning off-broadway A-Capella show, as well as performing the live Red Bull New Year Gala in Biejing, China. His beatboxing skills are featured on studio albums and live dance performances. Always using his wide knowledge of instrumental percussion, Michael is a true vocal drummer.

One of Michael's specialties is the unique combination of rhythm and movement called Body Percussion. He has performed as a body-percussionist internationally on live TV and in musical theater. He has worked with some of the world's top entertainors, including workshops with Cirque du Soleil and performances with Franco Dragone and New York's acclaimed Broadway & Stomp producer Marc Routh. Michael has taught body percussion in the educational system for schools in Israel and New York, on TV in reality shows in Spain and Italy, and in theater productions as a choreographer and rhythm-coach for performers in France, Spain, China and Italy.

A student of hip-hop, street, modern, Capoeira and even belly dancing Michael developed a personal style as a mover. He danced internationally in award winning shows with the Mayumana company for 12 years, with director & choreographer Giuliano Peparini for 4 years, and has also performed for producer Marc Routh (NY), and director Franco Dragone (China).

Michael has a passion for creating and performing characters in various settings. Some of his work includes both acting and clowning roles in rhythm and dance shows: Mayumana, Adraba, Momentum by the Mayumana company; Stage musicals: 1789 Les Amants de la Bastille by Giuliano Peparinin; and musical comedies: The Voca People by Voca People.

"I started my journey in rhythm back in 1988 when the Beatbox bug bit me. I was 13 at the time, learning how to play the trumpet and was fascinated by the rhythmical brass instrument. It would lead me to join the local youth orchestra, where I was surrounded by many other musical talents. Later on I started performing with the ensemble in various forms- from music concerts, to outdoor exhibitions and parades, and even national theater. In high school I majored in arts and sciences, and it was during those years that my passion for Hip-Hop grew and dancing took the place of the trumpet.

My professional career started in 1999 when I joined the Mayumana Company: a modern rhythm and dance theater company, that would grow in success to become one of Europe's top acts.

There I found a loving home and a place to explore and refine my skills in music, rhythm and dance. Being in college for Mechanical Engineering at the same time eventually meant I had to choose between the two: do I become an engineer- or an artist?

Touring the world for the past 16 years, I have had the honor and privilege to perform everywhere from my city of Tel Aviv, Israel to New York, Madrid, Amsterdam, Buenos Aires and Seoul, to name a few. I've performed on world class stages in sixteen countries, in elementary school auditoriums, on live television series and specials, award shows and for private benefit concerts. I've collaborated with a wide range of artists and companies from high-end aquatic circus like Franco Dragone Entertainment Group, to trance groups like Infected Mushroom. From Reality TV shows like Italy's Amici, to talk shows like ABC's Regis and Kelly.

Today I continue to explore the connections between rhythm and life on a daily basis – It is a never ending process of learning."