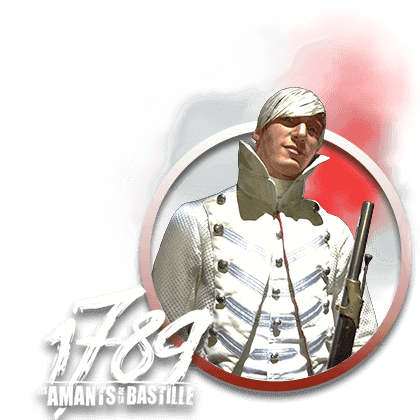 A French stage musical about the forbidden love between a peasant and a noblewoman set amongst the turbulent era of the French Revolution. The musical depicts the struggle for identity and peace by both King Louis XVI and the people of France.

The show’s climax is the storming of the Bastille and the declaration of the Rights of Man, the first constitution of newly democratic France.

Michael joined director and choreographer Giuliano Peparini (giulianopeparini.net) in August 2012 and worked on several aspects of the creation: developing a comedic character as part of a featured trio providing comic relief throughout the musical; composing, teaching and performing a percussion section for one of the songs and consulting on the design of the custom-built drums; and choreographing and teaching a body-percussion section for one of the pinnacle dramatic moments of the story during which the peasants refuse to back down and stand up for their rights against the king.

1789: Les Amants de la Bastille opened October 10, 2012 at the famous Palais des Sports theatre in Paris to rave-reviews and a large, dedicated fan base. Throughout its run the show performed to more than 400,000 spectators and released a successful accompanying double CD album (amazon.com). Produced by Albert Cohen and Dove Attia, the show also won the French Crystal Globe Award of 2013 for Best Musical (globesdecristal.com). The String Pulse Experience was born when I partnered with violinist Daisy Jopling (www.daisyjopling.com) to realize a common dream: creating a project that would connect youth with the magic of live performance on stage. String Pulse connects hundreds of kids from local and international schools in a single performance, a Gala that showcases their talents […]