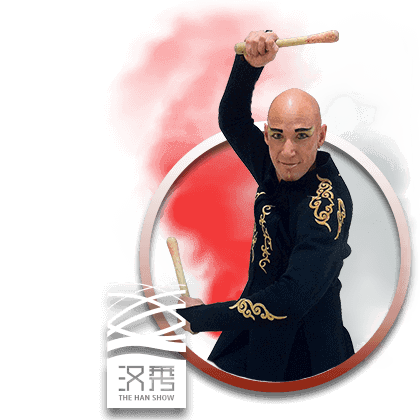 The Han Show is the first of five large-scale water circus shows The Franco Dragone Entertainment Group (dragone.com) began creating and producing in China in 2014. The groundbreaking show has a cast of 97, a production team of over 350, and is housed in a theatre designed by famed architect Mark Fisher (stufish.com) to resemble the iconic Chinese lantern. It is currently the biggest aquatic show in the world.

I worked as the percussion specialist, trained the entire Chinese cast in drumming and body percussion, collaborated with the choreographers to integrate rhythm into the framework of the story, and partnered with the composers to create exciting percussion pieces to complement the show’s music. I also worked closely with director Franco Dragone to improvise and create drumming scenes, eventually performing the part in the show’s world premiere on December 20th 2014.

The show is currently running in Wuhan, China. A French stage musical about the forbidden love between a peasant and a noblewoman set amongst the turbulent era of the French Revolution. The musical depicts the struggle for identity and peace by both King Louis XVI and the people of France. The show’s climax is the storming of the Bastille and the declaration of […]